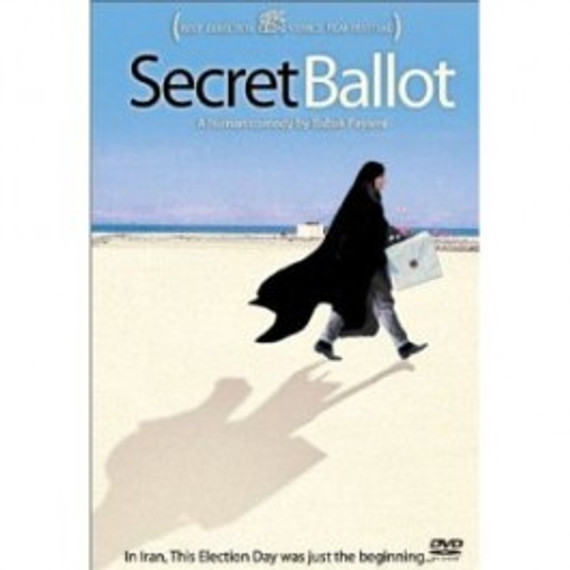 Secret Ballot can be described as humorous and witty. The plot revolves around campaign, political unrest, and culture clash. Its comic aspect comes from satire. Secret Ballots main genres are comedy and foreign. In terms of style, it is surreal and is New Wave. In approach, it is realistic. Secret Ballot is set, at least in part, in the desert and on an island. It is located in Iran. It takes place in contemporary times.

Iranian-Canadian filmmaker Babak Payami (ONE MORE DAY) looks at the problems of bringing democracy to Iran in this political and cultural satire, which could almost be called "neo-surrealist" in tone. The film begins with a ballot box being dropped from an airplane onto a desert island off the coast of Iran, terrifying a soldier stationed there who thinks its a bomb. Another soldier (Cyris Abidi) has orders to accompany the arriving agent who will collect the votes, and hes shocked to realize his charge is an educated, freethinking young woman (Nassim Abidi) from the city. During their long, argumentative day together, the pair run up against all sorts of reactions to this strange new electoral procedure, from fear, to jubilation, to utter indifference. Payami, working from an idea by Moshen Makhmalbaf (KANDAHAR), lets the action unfold in long takes, allowing Abidi to develop her character as more than just a symbol of progress as she patiently deals with the suspicious (and occasionally overexcited) island populace. A cautiously hopeful tale of democracy entering a restrictive society, SECRET BALLOT also serves as a sly commentary on the unconquerable cultural divide between Western and Middle-Eastern ways of thinking.

The Road to Paradise

The Story of Prophet Ibrahim [PC]

The Story of The Elephant