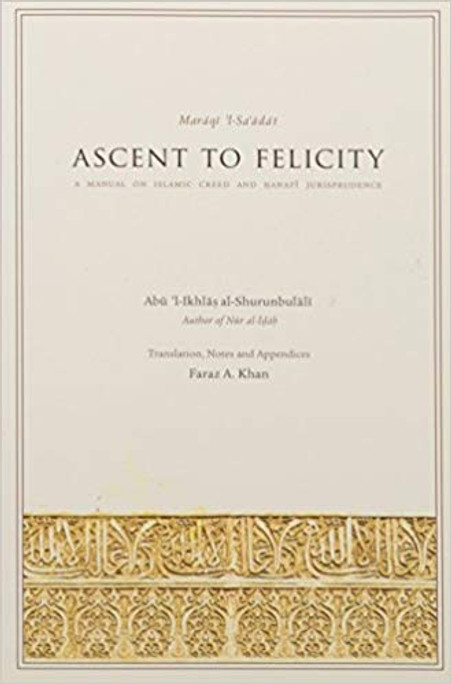 Manual on Islamic Creed and Hanafi Jurisprudence Written by the eminent 11th century Hanafi scholar, Abu 'l-Ikhlas al-Shurunbulali, Ascent to Felicity is a concise yet comprehensive primer in creed and jurisprudence. It spans all five pillars of Islam, as well as the topics of slaughtering, ritual sacrifice, and hunting. To supplement the text, the translator has added key explanatory notes taken from several reliable works on theology and jurisprudence. He has also added appendices that comprise numerous supplications related to the five pillars, presented in Arabic script along with English transliteration, as well as the etiquette of visiting the Messenger of All?h (Allah bless him peace) in Madina. "An admirable rendering into lucid, fluid English of Imam Hasan al-Shurunbulali's primer of Hanafi law, Ascent to Felicity. This concise but thorough work focuses on the five acts of worship. The book has the added feature of a fairly detailed presentation of the basics of the Muslim Creed. In translating this introductory section of Imam Shurunbulali's treatise, Khan's skill as a translator is on full display, as he has made sometimes involved theological concepts easily accessible to the average English reader. Khan has provided an additional service to both Shurunbulali's work and to contemporary Muslims by augmenting the translation with insightful and extremely useful explanatory notes. The value of this work, skillfully produced by White Thread Press, goes far beyond its benefit to adherents of the Hanafi legal school. Rather, it will prove of benefit to Muslims in general as well as researchers interested in latter-day presentations of the creed and practice of Sunni Muslims." - Imam Zaid Shakir Co-Founder and Resident Scholar, Zaytuna College "This book is an important contribution to the growing, but still small, corpus of traditional Islamic texts available in English translation." - Dr Ingrid Mattson President of the ISNA

An Introductory Text in Islamic Principles of Jurisprudence

The Mukhtasar Al-Quduri: A Manual of Islamic Law According to the Hanafi School

The Quran with Arabic Text by Saheeh International