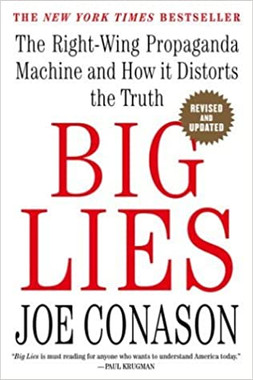 Big Lies: The Right-Wing Propaganda Machine and How It Distorts the Truth by Joe Conason

Joe Conason (born January 25, 1954) is an American journalist, author and liberal political commentator. He is the founder and editor-in-chief of The National Memo, a daily political newsletter and website that features breaking news as well as commentary and analysis from influential progressive thinkers. Since 2006, he has served as editor of The Investigative Fund, a nonprofit journalism center.

One of the country's most popular political columnists, his articles have appeared in dozens of publications around the world including the New York Times, the Washington Post, The New Yorker, The New Republic, The Nation, The Guardian, Salon, The Village Voice and Harpers.

Conason authored two New York Times best selling books, The Hunting of the President and Big Lies: The Right-Wing Propaganda Machine and How It Distorts the Truth. His newest book, Man of the World, focuses on the post-presidency of Bill Clinton. A winner of the New York Press Club's Byline Award, Conason has covered every American presidential election since 1980.

He and his family live in New York City.