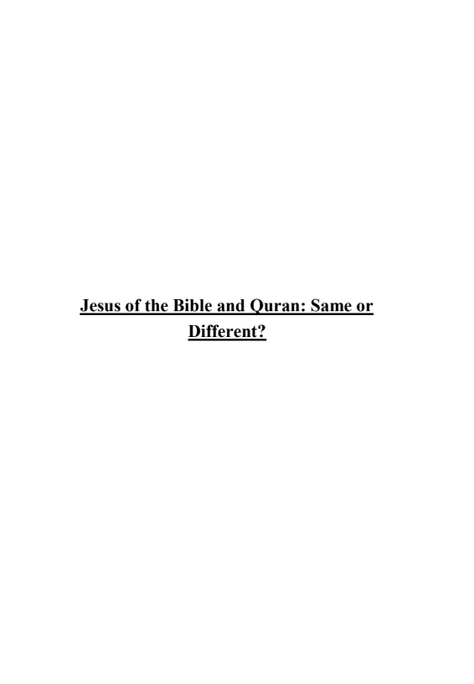 For many years in history Christians and Muslims have had no dialogue about the common or uncommon beliefs found in their books, but now in the 21st century it is possible with the internet, printing press, social media, and diversity of different people that live in most countries that have different beliefs. All of this opens up a door for conversation and debate. This book is not an attack on Christians, but rather a correction from a brother in humanity. This book is a light for Christians to see the errors of their belief in the light of the Quran which Allah revealed. Allah says in Surah al-maidah ayah 82, “You will find the nearest in love to the Muslims are those who say, “We are Christians.” That is because amongst them are priests and monks that are not proud.” In the Quran Allah calls the Christians, “The People of The Book” because they received prior revelation to the Quran through Jesus peace be upon him. This is a great title Allah gives to Christians out of respect.
There are many Surah’s in the Quran dedicated to Jesus and Mary like Surah Baqarah, Surah Al Imran, Surah Al Maidah, and Surah Maryam. Surah Maryam is a special surah dedicated to Mary, and her son Jesus peace be upon him. My goal in this book is to show how the Quran and Muhammad (PBUH) are a continuation of the previous revelations, and how the Quran confirms what was already sent, and denies and brings to light the errors of Christianity.

May Allah bless this book and bring to himself those who read it. Ameen."

A Thematic Commentary on the Quran (E-Book)

Mary and Jesus in the Qur’an (E-Book)

Muhammad a Prophet in the Bible (E-Book)

The Status of Jesus in Islaam (E-Book)

Journey Through the Qur'an: The Content & Contexts of the Suras

Did Jesus Say I Am God Or Worship Me? (E-Book)

Men and The Universe (E-Book)

The Divine Reality_ God, Islam & The Mirage Of Atheism (E-Book)