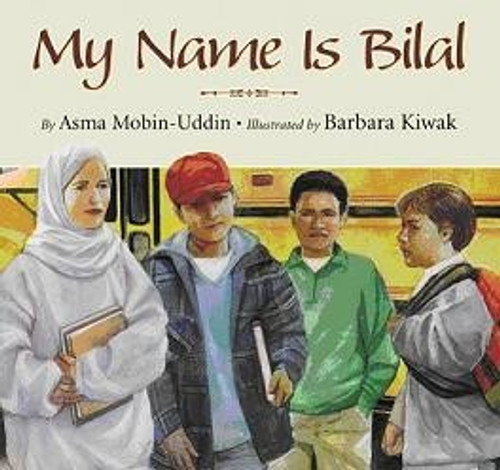 Bilal watches from a distance as a his sister, Ayesha, walks toward their new school. He sees two boys following closely behind her. Suddenly, one of the boys grabs Ayeshas headscarf and gives it a tug. Bilal knows he should come to the aid of his sister, but hes frozen with fear. Is this what it will be like to be the only Muslim kids in school?

Maybe it would be better if he hid that he is Muslim. Maybe then kids would leave him alone. But what about Ayesha?

Mr. Ali, one of Bilals teachers, and also Muslim, sees how the boy is struggling. He gives Bilal a book about the first person to give the call to prayer during the time of the Prophet Muhammad. That person was another Bilal: Bilal ibn Rabah. What Bilal learns from the book forms the compelling story of a young boy wrestling with his identity.

Asma Mobin-Uddins story about religious prejudice is hearfelt and compelling, and beautifully illustrated by Barbara Kiwak.

Dr. Asma Mobin-Uddin is a pediatrician who decided to write about the Muslim-American experience because she had difficulty finding good books in this area to read to her children. She was born and raised in the United States and is of Pakistani descent. An active member of her local Muslim community, Asma Mobin-Uddin has served on the executive committee of her Islamic Center and as vice-president of the Ohio chapter of a national Muslim advocacy organization. She frequently gives talks in the community about Islam. She is a member of the Society of Childrens Book Writers and Illustrators, and she lives in Columbus, Ohio, with her husband and children.

Barbara Kiwak is a graduate of the Maryland Institute College of Art. As a commercial illustrator, her clients have included Time-Life, Readers Digest, Highlights for Children, and The World Wildlife Fund. She has had numerous showings of her fine art in the Baltimore/Washington area. She lives in Baltimore.

Call to Prayer: The Story of Bilal

Bilal The First Muadhdhin Of The Prophet Of Islam USED