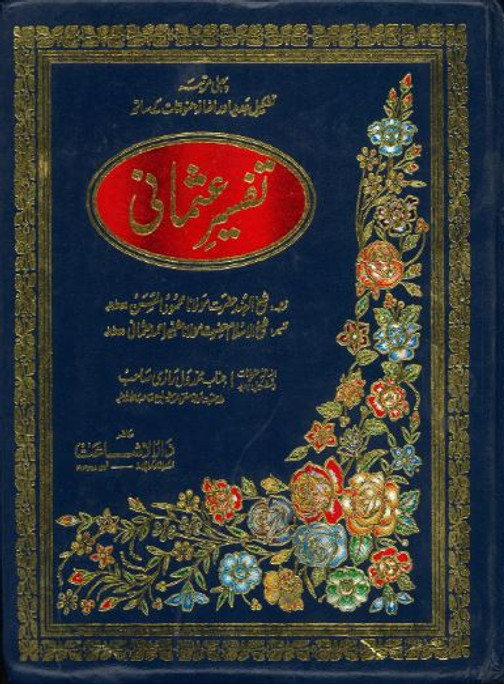 A very comprehensive, yet concise commentary of the Qur'an. the Arabic Text is with full Tashkeel in the Indo/Pak Script.

Tafsir-e-Usmani, the Urdu Tafsir undertaken by the great Muslim scholar popularly known as Shaikh-ul-Hind Maulana Mahmud Hasan. He completed the translation of Arabic verses and also wrote commentary for the first 3 parts (Fatiha, Baqra and Aal-e-Imran). The commentary of the rest of the Noble Qur'an was written by Allama Shabbir Ahmad Usmani, Shaikh-ul-Islam of Pakistan by whose name this commentary is known.

This tafsir by two of the most renowned scholars of Islam from the Indian subcontinent in the 19th century, Shaikh-ul-Hind Maulana Mahmud Hasan and his student 'Allama Shabbir Ahmad Usmani is regarded as the most authentic rendering of the meaning of the Glorious Qur'an in any language. It was initially an adaptation of Shah 'Abdul Qadir Muhaddith Dehlawi's translation and commentary known as Mudih al-Qur'an which according to many great 'ulama' is divinely inspired and accepted by all Muslims.

Maulana Shabbir Ahmad Usmani  was born in 1885, his father Maulana Fazlur Rehman belonged to the famous Usmani family of Deoband. He received his education at Deoband Dar ul Ulum Madrasah and  passed all his exams with distinction.  In 1908 and in view of his extra-ordinary abilities, he was given the post in the same madrassah as Ustad (teacher).

He is known as a theologian, writer, orator, politician, saint and student and Khalifa of Sheikh-ul Hind Maulana Mahmood- ul- Hassan. He was one of the leading religious leaders of Deoband who played a vital role in transforming the Muslim sentiments towards the demand for Pakistan.

He passed away in 1949 and was buried in Karachi, Pakistan.

The Quran with English Translation and Tafseer

Quran Kareem with Tafseer and Translation in Urdu

Anwar Ul Bayan with Translation and Tafseer in Urdu.....Vol 1-9.....انوارالبیان