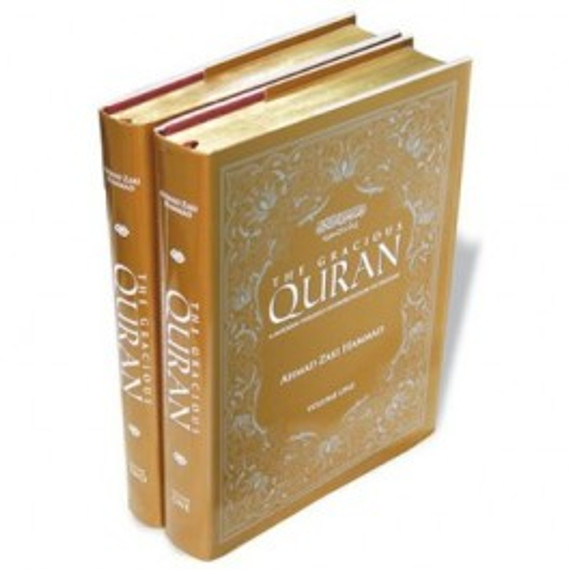 This contemporary, authoritative translation interprets the Qurans meaning for the English reader with unprecedented access to the foundational source of Islam, its civilization, and its peoples. It is highly reliable and powerfully expressed. Where the Arabic of the Quran swells with important implication, that intent is conveyed in this rendering with unobtrusive brackets. Its graceful layout and design augment the profound simplicity of the Qurans message. Every effort has been expended to make The Gracious Quran august, clear, accessible, and consistent.

This masterful limited edition 2 volume set has been painstakingly produced and researched, to the highest academic and professional standards. The translator, Dr. Ahmad Zaki Hammad, undertook more than 20 years of intense review and work to produce this monumental translation. Its production quality is of the highest, with golden edged paper, highest quality paper, multi-color printing, with an impeccable finish and touch .

This contemporary, authoritative translation interprets the Quran's meaning for the English reader with unprecedented access to the Book that is the foundational source of Islam, its civilization and its peoples, who now comprise nearly one-fourth of humanity across the breadth of all the Earth's continents and who form a crucial, contiguous community at the middle of the world.

Twenty years in the making, The Gracious Quran: A Modern-Phrased Interpretation of Its Meanings in English is both highly reliable and powerfully expressed. Where the Arabic of the Quran swells with important implication, that intent is conveyed in this rendering with a light hand in unobtrusive brackets, every effort having been expended to make its reading august, clear, accessible, and consistent while at the same time free of poetic pretension, philosophical complication, and lifeless literalisms. Its graceful layout and design augment the profound simplicity of the Quran's message and give some semblance of resonance to its almost hypnotic power of literary expression.

The interpretation of The Gracious Quran is thoroughly guided by wide and deep experience with the civilizations of both luminous Islam and the enlightened west, while not unmindful of the light that infuses the world's brilliant traditions. Fully four decades of scholarly expertise in Quranic studies and related disciplines are in its service, and the latest advances in the art of translation conspicuously benefit it.

Volume One comprises the complete text of the translation, along with concise introductory materials, annotated names and themes of the surahs, and substantive indexes. Volume Two presents the Arabic Text of the Quran in a new layout, along with an elaborate study that introduces the message-content of the Quran in the context of its form and style, a review of the history of Quran's translation, and a description of the approach and features of this translation. A significant, but nonetheless concise notation section is devoted to answering several hundred questions that may present themselves to readers who are unfamiliar with the Quran's historical context and revealed purpose.

The Gracious Quran opens a cosmic vista on the sacred in the English language. Through it, men and women of all faiths can gaze at the authentic world of the Quran and glimpse the Divine intent for humanity in this brief life and into the infinite Hereafter. At the very least, it promises to enrich the understanding of the inquiring minds and expand the awareness of the contemplative about the worldview and vision of the fast-growing faith-community of the way of Islam, religion of peace and willing submission to the true and only God.

The above text is a quotation from inside the dustcover of the 2 volume set.

Dr. Ahmad Zaki Hammad is an internationally known authority on Quran and Islamic Studies. He teaches Islamic Civilization and the Primary Disciplines of Quran Commentary, the Prophetic Traditions, and the Principles of Islamic Law at the foremost center of Islamic and Arabic learning in the Muslim world, AL-Azhar University (Faculty of Languages and Translations, Department of English). He is also a member of the Faculty of Shariâ€™ah, Department of Juristic Studies.

He received his early Islamic and Arabic training at Al-Azhar University, Cairo, and was awarded the graduate degree of Alamiyyah from the Faculty of Theology. He holds a Ph.D, in Islamic Studies from the University of Chicago and is the author of a study of translation of Abu Hamid al-Ghazali's Al-Mustasfa min Ilm al-Usul, The Quintessence of the Science of the Principles of Islamic Law; and also Islamic Law: Understanding Juristic Differences, a Primer on the Science of al-Khulaf al Fiqhi in Light of the Shari ah Sources.

He lived for many years in the United States, where he founded and served in numerous national and community Islamic institutions for American Muslims.

(Taken from the inside dust jacket of the Deluxe edition.)

It is 2007, and it was not common to have an English translation of the Quran, which was originally revealed in Arabic until the 1900s. During the twentieth century Muslims began to translate the Quran into English perhaps partially due to the fact that previous translations into other languages were most often done by individuals who were not necessarily Muslim or native Arabic speakers. Today, in 2007 there is a new interpretation and translation of the Quan that is different, it is presented in Modern-Phrased English, The Gracious Quran. This is an authoritative interpretation and translation of the Quran after two decades of scholarly research in which, each word was contextualized for accurate meaning. This interpretation is the work of premiere, internationally known scholar, Dr. Ahmad Zaki Hammad, whose first language was Arabic. Dr. Hammad studied in the east at Al-Azhar University and the west at University of Chicago and served two terms as President of the Islamic Society of North America. The Gracious Quran is being released in limited numbers by Universal Knowledge Institute in a Deluxe Signature edition this weekend at the 44th annual ISNA (Islamic Society of North America) convention in Rosemont IL, held from Friday the 31st of August through Monday September 3, 2007.

These are historic times we are living in. The world needs a better understanding of Quran, says the Universal Knowledge Institute President, Dr. Seema Imam. In fact, says Imam, "In today's global society a world-class education requires familiarity with the Quran and now, in Modern-Phrased English we have a new interpretation and translation, The Gracious Quran. This two-volume set spanning 1500 plus pages is recommended reading for the Muslim who wants to study the teachings of God or others who merely want to look into the Muslim Holy Book for a better understanding of the world."

An Interpretation of the Quran

The Garden of Paradise

The Fire of Hell