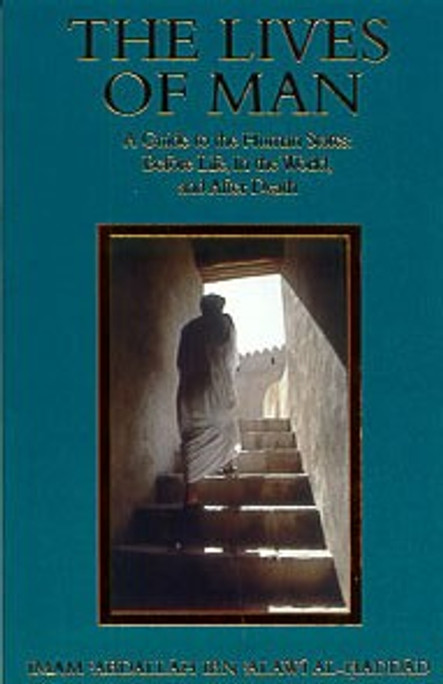 The Lives of Man by Imam Abdallah Ibn Alawi Al-Haddad Translated by Mostafa al-Badawi What happens after Death? Who are Munkar and Nakir? What will Heaven and Hell be like? What signs should we expect before the day of Judgement? Who is the Dajjal? When will the Mahdi appear? These and many other questions are answered, on the basis of the Quran and Hadith, in this fascinating book. Imam al-Haddad explains that every human being passes through the lives: before conception, life in the world, life in the grave, the Resurrection, and finally, the Garden of the Fire. A complete Muslim must be aware of each of these if he is to be sufficiently prepared for eternal life. The author Imam Abdallah Ibn-Alawi Al-Haddad (d. 1720), lived at Tarim in the Hadramaut valley between Yemen and Oman, and is widely held to have been the â€˜renewerâ€™ of the twelfth Islamic century. A direct descendant of the Prophet, his sanctity and direct experience of God are clearly reflected in his writings, which include several books, a collection of Sufi letters, and a volume of mystical poetry. He spent most of his life in Kenya and Saudi Arabia where he taught Islamic jurisprudence and classical Sufism according to the order (tariqa) of the BaAlawi sayids. Mostafa al-Badawi author of the Fons Vitae Imam al-Haddad Spiritual Masters series is a disciple in the Sufi order of Imam al-Haddad. Mostafa al-Badawi is one of the worlds premier translators of Islamic spiritual texts. He is a Consultant Psychiatrist and member of the Royal College of Psychiatrists. He studied under many shaykhs, foremost among whom is the late Habib Ahmad Mashhur al-Haddad. His other translations include: Book of Assistance, The Lives of Man, Two Treatises, The Prophetic Invocations, and Degrees of the Soul. He is also the author of Man and the Universe: An Islamic Perspective, recently published. He resides in Madinah.

Life, Death and The Life After

The Soul's Journey after Death

The Light of Dawn: Daily Readings from the Holy Quran

The Light of Allah (PB)

The Life of the Prophet Muhammad

The Life of Muhammad (SAAS)

The Life of the Prophet Muhammad (SAAS)

The Light of Allah (HB)

The Man of Fish and Other Story (Coloring Book )

The Meaning of The Glorious Quran