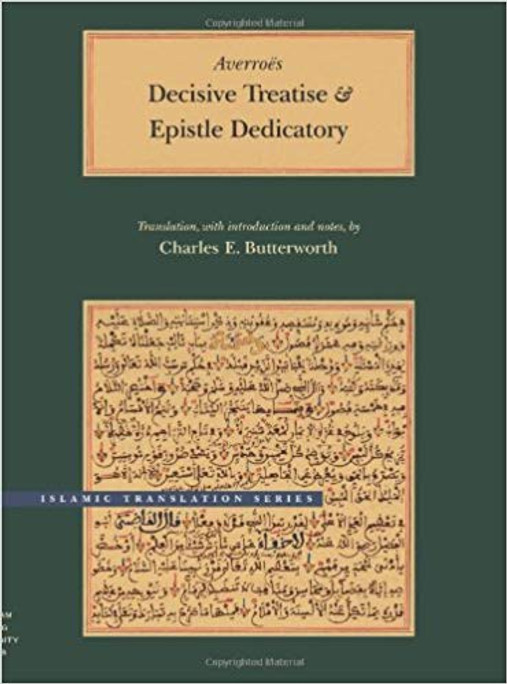 Averroes (Ibn Rushd, 1126-1198 C.E.) emerged from an eminent family of scholars and jurists in Muslim Spain. He distinguished himself as an authority on medicine and jurisprudence, but he is most widely known today as the first and last great Aristotelian in the classical Islamic world. His meticulous commentaries on Aristotle influenced Latin Christian thinkers and earned him favorable mention (and a relatively pleasant fate) in Dante's Divina Commedia.

The Decisive Treatise can be viewed as a plea before a tribunal in which the divinely revealed Law of Islam is the sole acknowledged authority. Averroes argues that the Law not only permits but mandates the study of philosophy and syllogistic or logical reasoning. In the course of his argument, he acquits certain earlier Muslim philosophers—particularly Avicenna (Ibn Sina) and al-Farabi—of the charge of unbelief. He dismisses al-Ghazali's criticisms of them as inconsistent and, indeed, as more harmful to the Islamic community than the philosophers' own views had been. For, says Averroes, al-Ghazali discussed difficult matters before audiences unequipped to understand them.

By contrast, Averroes contends that the Law is designed to appeal to human beings in different ways, according to their varied capacities. He outlines its three fundamental methods as demonstrative reasoning, dialectical arguments, and rhetorical statements. Further, he asserts that those unqualified to properly evaluate a particular mode of reasoning should be barred from it, lest it harm them and the community. Averroes's Decisive Treatise and its explanatory Epistle Dedicatory form a clear and even impassioned defense of the legitimacy and proper role of reason in a community of faith.

The Islamic Translation Series is designed not only to further scholarship in the study of Islamic philosophy, theology, and mysticism, but, by encouraging the translation of Islamic texts into the technical language of contemporary Western scholarship, to assist in the integration of Islamic studies into Western academia and to promote global perspectives in the disciplines to which it is devoted. Islamic civilization represents nearly fourteen centuries of intense intellectual activity, and believers in Islam number in the hundreds of millions. The texts that will appear in ITS are among the treasures of this great culture. But they are more than that. They are properly the inheritance of all the peoples of the world.Brigham Young University and its Institute for the Study and Preservation of Ancient Religious Texts are pleased to sponsor the Islamic Translation Series. In doing so, we hope to serve our fellow human beings, of all creeds and cultures.

The texts that appear in this series are among the cultural treasures of the world, representing as they do the medieval efflorescence of Arabic-Islamic civilization-a civilization in which works of impressive intellectual stature were composed not only by Muslims but also by Christians, Jews, and others in a quest for knowledge that transcended religious and ethnic boundaries. Together they not only preserved the best of Greek thought but enhanced it, added to it, and built upon it a corpus of scientific and philosophical understanding that is properly the inheritance of all the peoples of the world.

Treatise for the Seekers of Guidance

MycoMedicinals: An Informational Treatise on Mushrooms

Descisive Moments in the History of Islam